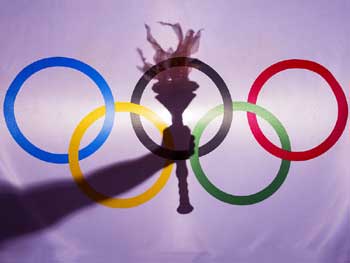 The First Olympic Games took place in the 8th century B.C. in Olympia, Greece. They were held Every Four years for 12 centuries.

In the 4th century A.D., All Pagan Festivals were banned by Emperor Theodosius I and the Olympics were No more.

Athletic tradition was resurrected about 1500 years later: The First Modern Olympics were held in 1896 in Greece.

The Olympic torch is Lit the Old fashioned way in an Ancient ceremony at the temple of Hera, in Greece, using a Parabolic mirror and Sun rays to kindle the Torch.


Torch starts its Relay to the Host city: It is usually carried by Runners but it has Traveled on a boat, on an airplane, on horseback, on the back of a camel, via radio signal, underwater and in a canoe.

The Relay torch and the Olympic flame are supposed to Burn during the Whole event. In case the Flame goes out, it can only be Reignited with a backup flame, which has been Lit in Greece as well.

Olympic Games are so called because they were Held in the city of Olympia.

The Official Languages of the games are English and French, complemented by the Official language of the Host country.

The Six Colors – Blue, Yellow, Black, Green, Red and the White background were Chosen because Every Nation’s Flag contains at least one of them.

From 1912-1948, Artists participated in the Olympics: Painters, Sculptors, Architects, Writers and Musicians competed for medals in their Respective fields.

An Olive branch Wreath was given to Winners of the Ancient Olympics events. Awarding the Gold, Silver and Bronze medals started in the 1904 Olympics.

1912 saw the Last Olympic Gold medals made Entirely out of Gold.

Women have been Allowed to compete in the Olympics since 1900.

Johnny Weissmuller, an Athlete turned Actor who played Tarzan in 12 movies, won Five gold medals in Swimming in the 1920s.

A Record 202 countries Participated in the 2004 Olympic Summer Games in Athens.

During the 1936 Berlin Games, Two Japanese pole-vaulters tied for Second place. Instead of Competing again, they Cut the silver and bronze medals in Half and Fused the two Different halves together so that each of them had a half-silver and half-bronze Medal.

The Olympic games are Divided into the Summer and Winter editions.