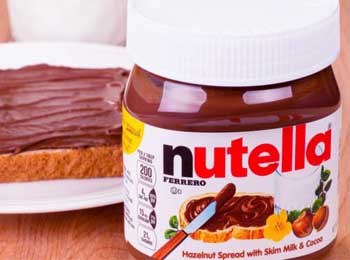 It all Started with a Chocolate shortage during World War II. When chocolate became a Rare, Pricey commodity that was Rationed during the war, founder Pietro Ferrero added Hazelnuts to extend the Cocoa supply. So, in 1946, Pasta Gianduja was born.

Ferrerro’s creation was originally Sold as a Solid brick, which he called Pasta Gianduja but by 1951 the Recipe was tweaked to make it the Creamy, spreadable.

In 1963, Ferrero’s son Michele Ferrero revamped ‘Supercrema’ with the intention of Marketing it throughout Europe. Its Composition was Modified and it was renamed ‘Nutella’.

The Name comes from the English word ‘Nut’ combined with the Latin suffix for Sweet ‘Ella’.


The main ingredients of Nutella are sugar and palm oil, followed by hazelnut, cocoa solids, and skimmed milk. In the United States, Nutella has soy products.

For years, Nutella was free for Italian Children. Shops all over Italy honored a BYOB (Bring Your Own Bread) policy where Kids could bring in their own Slice of Bread and get a Complimentary spread.

The Company which creates Nutella, Ferrero SpA, uses One Quarter of the World’s supply of Hazelnuts, with one jar using around 50 Hazelnuts.

Since 2007, World Nutella Day is held Every year on February 5th.

Under Italian law, Nutella can only be called Hazelnut cream because it doesn’t meet the Criteria for Minimum Cocoa solids.

In 2014, the Italian Postal Service released a 50th Anniversary commemorative Nutella 70-euro cent stamp, with a Jar of Nutella against a Golden background.

High amount of Sugar in Nutella makes it Shelf stable and will remain Edible at room temperature until the Best by date on the Jar.

If you Refrigerate Nutella, the Oil from the Hazelnuts will Harden and It will become very Difficult to spread.

Nutella is not an Acceptable baby name in France. In 2014, a French couple named their Baby Nutella. The Government deemed this an Unacceptable name and legally renamed the child ‘Ella’ when the family Failed to show up to Court.

In the United States, Ferrero was Sued in a class action for False Advertising leading to consumer Inferences that Nutella has Nutritional and Health benefits from Advertising claims that Nutella is ‘Part of a Nutritious Breakfast’. In April 2012, Ferrero agreed to pay a $3 million Settlement.

A Jar of Nutella is sold every 2.5 seconds

Patriarch of the Ferrero family, Michele Ferrero, has an estimated net worth of $23.5 billion.

Approximately 1.35 million pounds of Nutella are produced Every day.

In 2017, Thieves in Germany Managed to steal 20 tonnes of Nutella, making away with the Refrigerated trailer that it was Stored in. In 2013, Five tonnes were Stolen in a similar Heist.