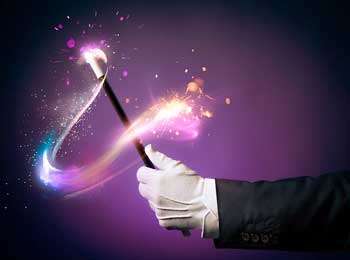 The word “Magic” is Greek. The first Magicians that have been noticed in History are Persians and Greeks.

Alexander Hermann, known as Hermann the Great, a French magician was responsible for the Outfits most Magicians wore – The tall hat and the Cape.

In the early 18th century Magic became a Respectable practice and began to be Performed by Rich private patrons.

St. Don Bosco, an Italian Priest declared saint by the Catholics, used Magic Tricks in 19th-century Turin to determine Children to come back to School, get help and attend church. This type of Magic is called Gospel Magic.


In 1584, the First book about Magic tricks, The Discoverie of Witchcraft was released by Reginald Scot.

Evidence shows that More books are written about Magic than other Performing art. Such Books don’t usually appear in Public bookstores and are instead Sold in specialized stored dedicated to Magical performers.

Jean-Eugene Robert Houdin is regarded as being the Father of Modern Magic, Inventing many tricks many magicians use. He moved Magic from streets and circuses to stages in the 1800s.

The Largest magic organization is the International Brotherhood of Magicians, which published a Monthly journal called The Linking Ring.

The Oldest organization is the Society of American Magicians and Houdini was its President for several years.

The Richest magician in the world is David Copperfield, with a net worth of $800 million. He has sold more than 33 million tickets so far and grossed around $4 billion, more than any other Solo entertainer in the world.

Since Magic refers to something Supernatural, some Modern Artists prefer the term “illusionist” since they Admit their performances are Skillful Deceptions only.

At the 1988 Magic Championships, a Magician was Disqualified because his Performance was so astounding the other Magician judges thought he must be Cheating. He performed the Same act three years later (letting the judges shuffle the cards) and Won.

Christopher Nicholas Sarantakos widely known as Criss Angel. His Criss Angel Mindfreak TV show was the First Show about magic in 40 years to air weekly when it Premiered in 2005.

There is a wide variety of Categories magicians can put their Efforts into Learning and Creating tricks for.

Areas like Vanishing, Transforming, Producing, Restoring, Transposing, Moving, Escaping, Levitating, Penetrating and Prediction are among the Areas magicians can go into in order to wow their Audiences.

Many people associate Magicians with the Stereotypical trick of pulling a Live rabbit out a top Hat.

It’s illegal in Queensland, Australia to own a Pet Rabbit unless you can Prove that you are a Magician.

The CIA hired a Magician to Train agents in Sleight of hand techniques for use in their Mickey-slipping LSD experiments.

Intellectual Property law doesn’t cover Magic tricks. An Amazing, Original trick can be Stolen from a magician and there is Nothing he can do about it.

Magician Derren Brown beat 9 leading chess players simultaneously by Replicating their Moves against each other at each table.