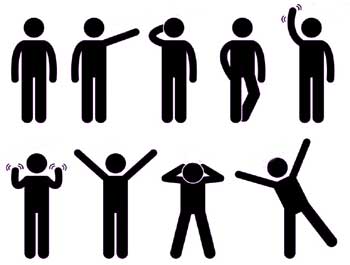 Both Males and Females find people with ‘Available’ body language as Most attractive. Available body language includes Smiling, Uncrossed arms, Uncrossed legs and Not looking down at shoes.


When we are Truly Relaxed and Comfortable, Facial muscles Relax and the Head will tilt to one side, Exposing our neck. This is a high Comfort display that is Impossible to Mimic when we feel Threatened.

People who Lie tend to Gesture less, Touch less and Move their arms and Legs less, than Honest people.

Fingertips planted and spread apart on a Surface are a significant Territorial display of Confidence and Authority.

An Honest and True response causes both Shoulders to Rise fully, sharply and equally.

A Sudden crossing of the Arms during a Conversation often indicates Discomfort.

Exhaling with puffed out cheeks is great way to release stress and to pacify.

Neck touching or Massaging is a Powerful and Universal Stress reliever and Pacifier in response to Stress.

People under Pressure when they are Lying dramatically Increase their Blinking rate. A Normal and Relaxed blinking rate is 6 to 8 blinks per minute and Eyes are Closed for about 1/10th of a second.

In Stressful situations, Some individuals will Pacify themselves by Crossing their arms and Rubbing their hands against their Shoulders, in a Self-administered Body Hug.

Splaying out on a Couch or a chair is normally a Sign of Comfort. However, when Serious issues are being Discussed, splaying can indicate Territorial or Dominance display.

One of the best ways to establish Rapport with someone is to Touch that person on the Arm somewhere between the Elbow and Shoulder.

Abused children often Manifest a ‘Freezing’ response. In the Presence of an Abusive parent or Adult, their Arms will lie Dormant at their sides and they Avoid Eye contact.

Folding your Arms, During an Interview makes you seem Unfriendly and Closed off from the Interviewer.

People born Blind can perform the Same body language Expression as People who can See.