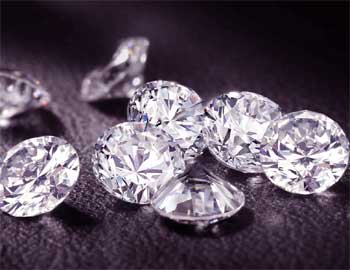 Diamonds were first Mined in India over 2800 years ago.

Diamonds were used to Engrave Gemstones in India by 300 BCE.

Ancient Hindus used Diamonds in the Eyes of Devotional statues and believed that a Diamond could Protect its wearer from Danger.

The Ancient Greeks believed that Diamonds were Splinters of stars that has Fallen to the earth.


Diamonds are known as Symbols of Strength, Courage and Invincibility.

The word ‘Diamonds’ comes from the Greek word ‘Adamas’ which means ‘Unconquerable and Indestructible’.

The word ‘Carat’ is thought to be derived from the Carob Bean – an Ancient unit of Weight.

The Historic Cullinan Diamond, found in South Africa in 1905, Largest Diamond ever discovered Weighed an astounding 3,106 ct was cut into a total of 105 diamonds of Exceptional Color and Clarity.

The Largest Cut diamond is the Great Star of Africa – 530 carats.

The Tradition of giving a Diamond Engagement ring dates back to the year 1477 when Archduke Maximilian of Austria gave a diamond ring to Mary of Burgundy.

A Rough diamond looks so similar to a Pebble that Most people will just Pass it by without giving it a Second look.

A Diamond is Four times harder than the next Hardest material on the scale – Sapphires, Corundum and Rubies.

Diamonds are the very Hardest natural substance. The only thing that can Scratch a Diamond is Another diamond.

To Produce a Single One carat diamond, 250 tonnes of Earth needs to be Mined

A Single diamond of 2 carats is worth more than Double than that of 2 One carat Diamonds.

On average a Diamond will lose about 50% of its Original Weight when it is Cut and Polished.

Diamonds form approximately 200km Beneath the surface of the Earth and are pushed to the Surface in a matter of moments by Volcanic eruptions.

Diamonds are made of a Single element. They are nearly 100% Carbon.