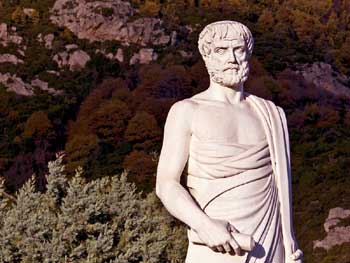 The Soul never Thinks without a Picture. Hope is the Dream of a Waking man.

Dignity does not Consist in Possessing Honors but in Deserving them.

It is the Mark of an Educated mind, To be able to Entertain a thought without Accepting it.

The Least initial deviation from the Truth is Multiplied later a Thousand fold.


Comedy aims at Representing men as Worse, Tragedy as Better than in Actual life.

Whosoever is Delighted in Solitude is either a Wild beast or a God.

We think in Pictures. If you Wish to Change what you Think, Change the Picture.

It is Possible to Fail in many ways, While to Succeed is possible only in One way.

Character may almost be called the Most Effective means of Persuasion.

The one Exclusive sign of thorough Knowledge is the Power of Teaching.

It is Easy to perform a Good Action but not easy to Acquire a settled Habit of Performing such actions.

Man is a Goal Seeking animal. His Life only has Meaning if He is Reaching out and Striving for his Goals.

The Ideal man bears the Accidents of Life with Dignity and Grace, making the Best of Circumstances.

The Ultimate value of Life depends upon Awareness and the Power of Contemplation rather than upon mere Survival.

Criticism is Something we can Avoid easily by saying Nothing, Doing nothing and Being nothing.

For what is the Best choice, for Each individual is the Highest it is Possible for him to Achieve.

You will Never do anything in the World without Courage. It is the Greatest Quality of the Mind next to Honor.

The Happy Life is regarded as a Life in Conformity with Virtue. It is a Life which involves Effort and is Not spent in Amusement.

Quotes by Greek Philosopher’s: Socrates Thoughts – How to Live Better