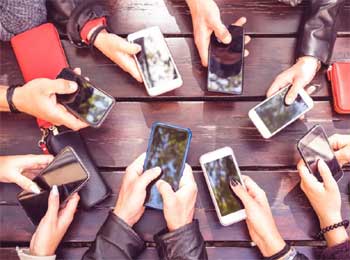 The First mobile call was made by Martin Cooper in 1973.

There are more Mobile phones than PCs, the Ratio is 5 times.

Around 80% of the World’s population has a Mobile phone.

Within 3 minutes of Delivery, 90% of text messages are Read.


More than 90% of Adults have their Mobile phone within arm’s Reach all the time.

74 % of Smartphone users use their Mobile phone to help with Shopping, of which 79% Ultimately making a Purchase.

The Best-selling mobile phone is the Nokia 1100. To date, There are 250 million units Sold and It is considered one of the Toughest phones ever created.

Be Careful while using your Mobile phone, the Number of Bacteria found on the Screens of mobile phones is 20 and 30 times more than what has been found in a Toilet bowl.

Your Mobile phone has more Computing power than the Computers used for the Apollo 11 Moon Landing.

iPhone 5 Black Diamond is the Costliest phone in the World, which costs $15 million. It will take Nine weeks to build, made of 135 gram solid Gold of 24 carat and the Chassis was inlaid with 600 white Diamonds.

According to Guinness World Records, Sonim XP3300 Force is recognized as the Toughest phone. It survived an 84ft drop without any Operational damage.

Since the year 2000, a World Championship in Throwing mobile phones is held. The Distance record, to date, is set at 97 meters for Men and 40 meters for Women.

The Mobile game ‘Send Me to Heaven’ involves throwing your Phone as High in the Air as you can. The Creator said he made it with the Hope of Destroying as many iPhone as possible but Apple banned it from the App Store.

There is more Gold in a Ton of mobile phones than a ton of Gold ore. It takes a ton of ore to get 1g of Gold but you can get the Same amount from Recycling 41 mobile phones.

Waterproof mobile phones came to Market because Japanese youngsters like to Use them in the Shower. 90% of Mobile phones in Japan, are Waterproof.

Insomnia, confusion and headaches are caused due to Mobile phone radiation.

Around 200,000 million human beings suffer from this phobia and as the fear of certain people who are afraid to leave their home without their mobile phone.

There is also term ‘Ringxiety’ that is used to Describe the feeling of hearing the phone when it is actually not ringing, and another called ‘Phubbing’ which describes the behavior of a person who ignores everything around him/her due to the use of the mobile phone.