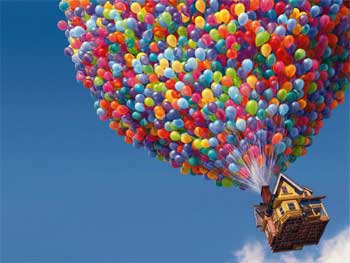 Balloons were First invented in France in the late 18th century. Two Paper makers, Jacques and Joseph Montgolfier, discovered that when paper bags are filled with hot air, the bags rise.

The Rubber balloon was invented by Michael Faraday in 1824, during Experiments with various gases. He invented them for use in the lab.

Today, balloons are made from Rubber, Latex, Polychloroprene or a Nylon fabric.


In the 1570s, Balloon was a popular game played using a Large inflated leather ball that was kicked or tossed back and forth, by the 1590s, the word Balloon was used to refer to the Ball itself.

Often the term ‘Party Balloon’ will refer to a twisting balloon or pencil balloon. These balloons are Manipulated to create shapes and figures for parties and events, typically along with Entertainment.

A Decorative use for balloons is in Balloon drops. In a Balloon drop, a plastic bag or net filled with air-inflated balloons is suspended from a Fixed height. Once released, the balloons fall onto their target area below.

Balloon drops are commonly performed at New Year’s Eve celebrations and at Political rallies and conventions.

Balloons are used for publicity at Major events. Screen printing processes can be used to print Designs and Company logos onto the balloons.

A Balloon which has an Engine to propel it is called a dirigible balloon or airship.

Balloons are used in Medicine too! A surgical procedure called Angioplasty uses tiny balloons that are Inserted into a blocked blood vessel. After insertion the balloon is then inflated to Clear the plaque buildup and Stretch the vessel wall.

With the Environment depleting at high rate, good news is that Latex or rubber balloons are Biodegradable. They are said to decompose within 6 months to a year.

The Fastest time to create one balloon Dog sculpture is 6.5 seconds by John Cassidy (USA) at the Balloon Saloon store in New York, USA on 28 March 2006.

The Longest balloon Chain measured 20,024 meters and was achieved in Mumbai, India, on 9th February 2011. The Balloon chain contained 198,240 balloons in total.