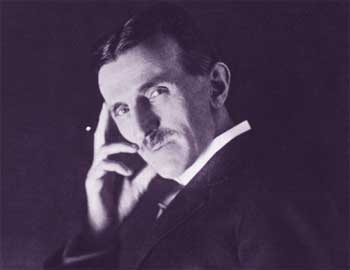 Nikola Tesla was an inventor and engineer who garnered over 300 patents in his lifetime. His most famous work, however, was the development of alternating current which laid the foundation for futuristic technologies.

Our Virtues and our Failings are inseparable, like Force and Matter. When they Separate, Man is no more.


Life is and will ever remain an Equation incapable of Solution but it contains certain known Factors.

The Gift of Mental power comes from God, Divine Being and if we Concentrate our Minds on that Truth, we become in tune with this Great power.

Most persons are so Absorbed in the Contemplation of the Outside world that they are wholly Oblivious to what is Passing on within Themselves.

We crave for new Sensations but soon become Indifferent to them. The wonders of Yesterday are today Common occurrences.

Misunderstandings are always caused by the Inability of Appreciating one another point of View.

Though free to Think and Act, We are held Together, like the Stars in the firmament with tics inseparable. These Tics cannot be seen but we can Feel them.

Peace can only come as a Natural consequence of Universal Enlightenment and merging of Races and we are still far from this Blissful Realization.

The Human being is a Self-propelled automaton entirely under the control of External influences. Willful and predetermined though they appear, his Actions are Governed not from within but from without. He is like a Float tossed about by the Waves of a turbulent sea.

Intelligent people tend to have Less friends than the Average person. The Smarter you are, the more Selective you become.

When natural Inclination develops into a Passionate desire, One advances towards his Goal in Seven-league boots.

Deficient observation is merely a form of Ignorance and Responsible for the many Morbid notions and Foolish ideas prevailing.

Instinct is something which Transcends Knowledge. We have, undoubtedly, certain Finer fibers that enable us to perceive Truths when Logical deduction or any other Willful effort of the brain, is Futile.

The Progressive development of man is vitally Dependent on Invention. It is the Most important product of his Creative Brain.

Anti-social behavior is a trait of Intelligence in a World full of Conformists.

Every living being is an Engine geared to the wheel work of the Universe. Though seemingly Affected only by its immediate Surrounding, the Sphere of external influence Extends to infinite Distance.