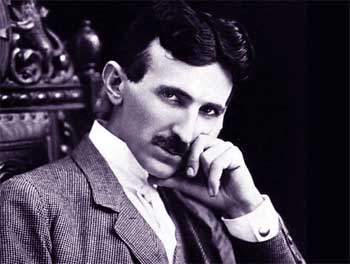 If you Want to find the Secrets of the Universe, Think in terms of Energy, Frequency and Vibration.

If you only knew the Magnificence of the 3, 6 and 9 then you would have the Key to the Universe.

If your Hate could be turned into Electricity, it would Light up the Whole world.

All that was Great in the Past was Ridiculed, Condemned, Combated, Suppressed – only to Emerge all the more Powerfully, all the more Triumphantly from the Struggle.


What one Man calls God, Another calls the Laws of Physics.

You may Live to see Man-made Horrors beyond your Comprehension.

The Individual is Ephemeral, Races and Nations come and pass away but man Remains.

My belief is firm in a Law of Compensation. The true Rewards are ever in Proportion to the Labor and Sacrifices made.

My Method is Different. I do not Rush into Actual work. When I get an Idea I start at once Building it up in my Imagination. I Change the Construction, make improvements and Operate the device entirely in my Mind.

My Brain is only a Receiver, in the Universe there is a Core from which we obtain Knowledge, Strength and Inspiration.

Invention is the most Important product of Man’s Creative brain. The Ultimate purpose is the complete Mastery of mind over the Material world, the Harnessing of human Nature to human Needs.

The Carrying out into practice of a Crude idea as is being Generally done is, I hold, Nothing but a Waste of Energy, Money and Time.

One may feel a Sudden wave of Sadness and rake his Brain for an Explanation when he might have noticed that it was caused by a Cloud cutting off the Rays of the Sun.

Merciless is the Law of Nature and Rapidly and Irresistibly we are drawn to our Doom.

If the Genius of Invention were to reveal tomorrow the Secret of Immortality, of Eternal beauty and youth, for which all Humanity is aching, the same Inexorable agents which prevent a Mass from changing suddenly its Velocity would likewise Resist the Force of the new Knowledge until time gradually modifies Human thought.

The Scientific man does not aim at an Immediate Result. He does not Expect that his Advanced ideas will be readily taken up. His duty is to lay the Foundation for those who are to come and Point the way.

There is No Energy in Matter other than that received from the Environment.

We are Whirling through endless space, with an Inconceivable speed, all around Everything is Spinning, everything is Moving, Everywhere there is Energy.