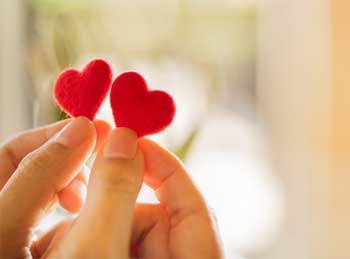 Feeling of Euphoria, you get when you Fall in Love is the same Feeling that Drug users experience. Both actions Trigger the release of Happy Hormones like dopamine, oxytocin and adrenaline.

Research has found that Couples who are in Love and bond in a Romantic relationship Synchronize their Heart rates after Gazing into each others eyes for Three minutes.

Couples that are Either too Similar or too Different tend Not to Last very long.

Research shows that Long-term couples with Deep, Strong connections can successfully Soothe each other in Stressful situations.


Expressing Gratitude towards people you Love causes an Immediate Spike in your Happiness.

When you Fall for Someone you probably won’t be able to Avoid feeling of Butterflies in your Stomach. They are caused by Adrenaline, which floods your Body during flight or fight Response situations.

When Couples embraced, they had Increased levels of oxytocin – Hormone responsible for Lower stress levels and Mood boosts.

Being in a Loving relationship Impacts your Life for the better both Emotionally and Physically.

Even the most Pessimistic people can Change for the Better with a little bit of Love in their Life.

Couples who Laughed together were more Supportive of one another and more Satisfied in their Relationship compared to their Chuckle free Counterparts.

For both Men and Women, How someone Smells and whether you are innately Drawn to that Scent goes a Long way in Determining your Attraction.

When you find Someone who makes you want to be the Best version of Yourself, your Brain responds accordingly.

The Social connection that comes from Being in a Loving relationship Activates the part of the Brain that’s responsible for Selflessness and Emotional processing.

Red roses are the Flowers of Love. That’s because the Bright flowers are the official favorite of Venus, the Roman Goddess of Love.

While being in Love activates the regions in the brain Connected to Empathy, Pure and Unadulterated, Lust is connected to the similar but Different areas of the Brain associated with Motivation and Reward.

Research has provided Evidence that Intense, Traumatizing events such as a break-up, divorce or betrayal can cause real Physical pains in the area of One’s Heart. This condition is called the Broken Heart Syndrome.