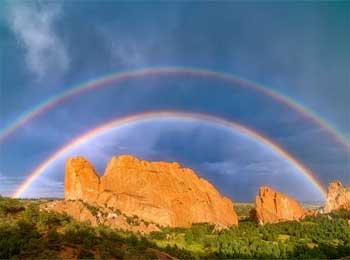 Rainbows are formed when Light is reflected through Water droplets from Rain shower. Basically, they are many little Arches that Merge together and form a Big arch up, creating a Techni-colored sky.

A Rainbow Arch is a 42-degree angle starting from the Direction opposite from the Sun.

A Person standing next to you is standing in a Slightly different spot and sees the Rainbow different because they see different Raindrops.

You cannot Touch a Rainbow as It has no Physical appearance.


On the Ground, we only see a Semi-circle rainbow but from very High up, such as on an Airplane, You can see a Rainbow in a Complete Circle.

The State of Hawaii is Home to the most Rainbows than any other area on Earth.

There is No set Number of colors in a Rainbow because of Each hue Blends into the Next without a Hard boundary.

According to Greek Mythology, the Rainbow is a bridge between Heaven and Earth.

Earth is the only Planet in the Solar system where Rainbows are Possible.

A Rainbow is not Located at a Specific distance from the Observer.

Double rainbows occur when Light bounces inside the Water droplet more than Once.

A Monochrome or Red Rainbow is a very Rare variation of Rainbow, Normally observed at either Sunrise or Sunset.

Between a Rainbow and its Double the sky is Darker because Light reflected in Raindrops in this part Does not reach the Observer. This area has a name: an Alexander’s band.

Unlike a Double rainbow that consists of two Separate and Concentric rainbow arcs, the very Rare Twinned rainbow appears as two Rainbow arcs that Split from a Single base.

Upside down rainbows sometimes occur they are also known as Sun Smiles. They form when the Sunlight reflects through Ice crystals.

Fogbow a phenomenon similar to a Rainbow, produced by Sunlight shining on Fog.

Moonbows rainbows occur when the Moon’s light Reflects through the Raindrop.