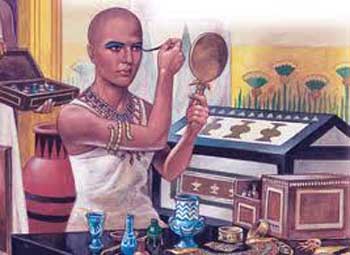 The word ‘Cosmetic’ is from the Greek word kosmos meaning to Arrange, order or adorn.

Cosmetics are symbolic of a Civilization’s practical concerns, such as Class hierarchies and Conventions of beauty.

The Ancient Egyptians regarded beauty as a Sign of holiness. Cosmetics were an integral part of Hygiene, health, and ritual. Pills and creams protected against the Sun and dry winds, and oils were used in Perfumes in religious rituals.

In ancient Greece, women would Lighten their hair using Plant extracts or arsenic.


Ancient Romans were fond of Black hair dye. To make the dye, They fermented leeches in vinegar.

During the Roman era, Lipstick was a social marker and even men Painted their lips to Indicate their rank.

The Aztecs would use Dried beetles or cochineal, to dye their Lips and Eyes red.

Medieval women would Swallow arsenic and dab bat’s blood on their Skin to improve their Complexion.

During the 1400s, a Pale complexion was all the Rage among women. To Achieve this look, Some women bled themselves, either by using Leeches or Slashing their veins in a method called ‘Cupping’.

Grecian women in 3000 B.C. would use Oxen hair as fake eyebrows. In the 18th century, women would Shave off their eyebrows and use Gray mouse hair instead.

In an Effort to maintain a Porcelain complexion, Young women in 18th-century Spain would Eat clay, even though it could lead to Anemia or chlorosis.

The First Nail polish was invented in China in 3000 B.C. by Mixing egg whites, beeswax, gum and colored powder.

Lipstick first appeared approximately 4,000–5,000 years ago in Ancient Mesopotamia when Women ground precious gems into dust to Decorate their lips.

During the Middle Ages, the Catholic Church taught that makeup was sinful. By A.D. 1000, makeup and body paint fell out of favor in all Christian countries.

In Britain’s Victorian Age, when wearing Makeup was associated with Low morals, Ladies resorted to pinching their cheeks to make them appear Red instead.

In the 1400’s, women whitened their Faces with ‘ceruse’ which was made from Vinegar and powdered lead. Ceruse rapidly ate the Skin away, causing the need to apply more than one layer. It eventually Killed the person.

During the Elizabethan era, Coal tar was used as Mascara, eyebrow pencil, and eyeliner. It was Flammable, has a bad smell and caused blindness.