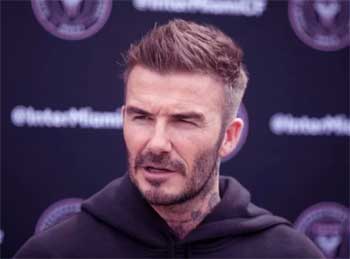 David Beckham is an English retired Professional footballer. He is the first English player to win League titles in Four Countries: England, Spain, the United States and France. He announced his Retirement in May 2013 after a 20-year career, during which he Won 19 Major Trophies.

The only Time you Run out of Chances is, When you Stop taking them.

Being Hardworking is the Best thing you can Show children.


Don’t be like Most People. Most people Give up on their Dreams.

You will go through Tough times, It’s about Getting through them.

You can be the One in a Million. Don’t be Discouraged by the Odds to Succeed.

Always have Something to look Forward to.

It’s so Important to have Manners and Treat people from all Walks of Life the Way they should be Treated.

I have always Believed that if you want to Achieve anything Special in Life you have to Work, Work and then Work some more.

The Secret to my Success is Practice.

My way of getting through Difficult times of Low Confidence – Hard work.

I Always say that Practice gets you to the Top most of the Time.

I have Always come back from Adversity and I have always had the Mentality of Proving people Wrong.

It’s a Man’s Job to Respect a Woman but It’s a Woman’s job to give him Something to Respect.

The Secret of the Team’s Success is Easy – Unity and Hard work.

As a Footballer you always want to Test yourself against the Best.

There is Room for Boys and Girls football in the World – That’s what I Believe.