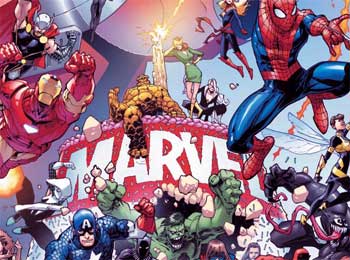 Marvel’s first Hero, appearing in Marvel #1 in 1939 was The Human Torch –  an Android that could Control fire. The Comic book sold more than 800,000 copies.

This Marvel Character is also said to be the first Mutant in History. His origins trace back to 5000 years ago, Dating back to the times of ancient Egypt.

Marvel was the First comic book company to give an African American his very own Comic book.


Stan Lee once Posed nude for a book about the Behind the scenes details of the Marvel offices, with just a book covering his privates. Marvel prevented the Photo making it into the book, though and it wasn’t released for 29 years.

Stan Lee who worked for Marvel as a Writer for hire sued Marvel because he was Hurt by Marvel Comics decision to keep Profits from him over his 60 years with the Company.

DC refused the Offer and continued to Publish comics. Later on, DC became a Hit with readers as Marvel hit Bankruptcy in 1996.

Due to a Strange law in America where importing toys resembling Humans are Taxed higher than those that do not. Marvel successfully argued in Court that because their X-men action figures are Mutants, They should be exempt from the Tax.

In the Marvel Universe, Santa Claus is actually the World’s most Powerful mutant ever Registered.

Amalgam was known as a Publishing imprint that was Shared by both DC and Marvel Comics. In the fused publications, Superheroes such as Batman and Wolverine were fused to make the Character Dark Claw, Superman and Captain America became Super-Soldier.

There is an Issue called The Punisher Kills the Marvel Universe, where he Kills every single Marvel Superhero and Villain, including Himself.

Despite all the Gods that roam the Universe, Marvel Universe lived under one true God called One-Above-All.

During the early 90’s, King of Pop Michael Jackson attempted to Buy Marvel Comics. He wanted to Star as Spider-Man in his version of the Movie.

Stan Lee himself has Stated numerous times that the Correct way of writing Spider-Man’s name is with the Hyphen. This is also because the Hyphen is used to Distinguish the Webbed crusader from Superman.

When the Hulk was first introduced in the Comics, he was Green-skinned due to a Printing error with the Four-color printing process. Each time an issue of The Incredible Hulk was Printed, it would be in Different shades of Grey each time.