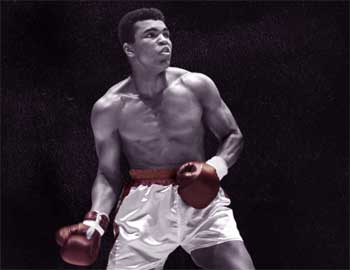 Muhammed Ali is widely Regarded as one of the Greatest Boxers of all time. He was the Heavyweight Champion of the World three times and has Defeated some of the Best boxers in the History of the Sport.

What Keeps me Going is Goals.

I Don’t count my Sit-ups. I only start Counting when it starts Hurting because They are the only Ones that Count.


I Hated every minute of Training but I said, “Don’t quit. Suffer now and Live the rest of your life as a Champion”.

It’s Lack of Faith that makes people Afraid of meeting Challenges and I Believed in Myself.

I Know where I am Going and I know the Truth and I Don’t have to be What you want Me to be. I am Free to be What I want.

I am the Greatest. I said that Even before I Knew I was. I Figured that if I said it Enough, I would Convince the World that I really was the Greatest.

It’s been one of the Most important Tools for me in Personal growth for Understanding myself, How I Am and What Effect I do have on Other people.

If my Mind can Conceive it and My Heart can Believe it – Then I can Achieve it.

I Never thought of Losing but now that it’s Happened, the only Thing is to do it Right. That’s my Obligation to all the people who Believe in me. We all have to take Defeats in Life.

I Don’t Trust anyone, Who is Nice to me but Rude to the Waiter because they would Treat me the Same way if I were in that Position.

I am an Ordinary man who Worked hard to Develop the Talent I was given. I believed in Myself and I Believe in the Goodness of Others.

Whatever the Challenge was, However Unattainable the Goal may have seemed, I Never let anyone Talk me out of Believing in Myself.

My Wealth is in my Knowledge of self, Love and Spirituality.

I have made my Share of Mistakes along the way but if I have Changed even one life for the Better, I haven’t Lived in Vain.

The Fight is Won or Lost far away from Witnesses – Behind the lines, in the Gym and out there on the Road, Long before I Dance under those Lights.

Inside of a Ring or out, Nothing wrong with Going down. It’s Staying down that’s Wrong.