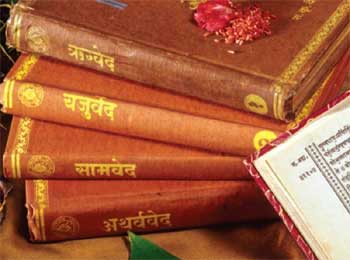 Oldest Knowledge to Humankind: Vedas are considered the Sacred Knowledge. There are Four major Vedas: Rigveda, Samaveda, Yajurveda and Atharvaveda.

Here are Some Interesting Facts about Vedas.

Vedas are written in Vedic Sanskrit which is Mother of all Languages of the World.

Veda Knowledge was only Transmitted Orally for a Period of hundred years and Eventually it was Written down.


Each mantra of Vedas can have Several meanings – Spiritual, Social, Physical etc.

Not one Syllable can be Altered from Vedas.

Vedas are strongly Against any Discrimination based on Caste, Gender or Birth. They strongly advocate Meritocracy.

Vedas respect all Life-forms and are Against any sort of Killing for Selfish Desires.

The Vedas are Relevant to all Geographies of World and All Periods.

There are 1028 mantras in Rig Veda which are Prayers to God and the “Pancha Bhutani” – the Five forces: Earth, Water, Wind, Fire and Sky.

Rig Veda consists of the Explanation to the Origin of the World, Power of Gods and Art of Living.

As the Veda of Melodies, Sama Veda is considered to be the Oldest Music organization in the World. It contains all Types of Music, Mantra, Chhanda and Linguistics.

The Sama Veda is the Shortest of all Four Vedas.

When One digs Deeper into the Yajur Veda, one can find a Deeper Meaning than just the Rituals.

Yajur Veda attempts to Develop the Level of Consciousness among people and is Linked to the Yogic practice of Purifying the mind, body and soul. It can Help people to Awaken the Consciousness within and Open to the Study of Life in a Better manner.

Classical Atharva Veda is related to religion and socio-cultural aspects of society and provides knowledge about the same.

Atharva Veda is related to the Cult of Occult science and the Opposite side of Science- Ones related to Death, Spirits and the Afterlife.

You May Also Like: Facts about Miraculous Temples of India