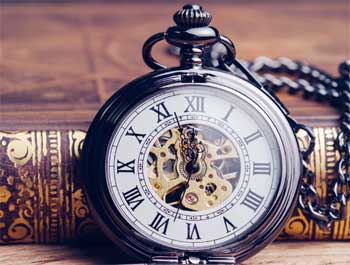 A Year goes by 15 microseconds Faster at the top of Mount Everest than it does at Sea level.

The Strontium Atomic Clock is the most Accurate clock ever built. It’s Accurate to within a second over 15 billion years.

Despite what we have been Taught, a Day isn’t a full 24 hours. It Actually takes 23 hours, 56 minutes and 4.2 seconds for the Earth to Rotate once.


It takes Time for Light to reach us and as a result, Everything we see is in the Past. When you see the Sun out your window, the Light is already Eight minutes and 20 seconds old.

A New Experience will always seem to stay Longer in your Memory than older ones. This is called the Oddball effect and It is the Reason that Time seems to speed up as you get Older.

The First known Civilization to keep Track of time were the Sumerians, who settled in Mesopotamia. Their Calendar was based on the Moon and It had 30 days divided into 12 periods that again had 30 parts.

To keep this Time in Sync with Earth’s slowing rotation, a ‘Leap second’ must be added Every few years.

Accurate clocks that Measure hours, minutes and seconds have improved with the Invention of Sundials, Water clocks, Mechanical clocks, Pendulums and Hourglasses through to the Digital displays and Atomic clocks of today.

Different parts of the World are Located in Different time zones. This means that while you are having Breakfast in the Morning, Someone in another part of the world is having Dinner.

Normal years have 365 days but a Leap year has 366. The Earth takes a Little longer than 365 days to go around the Sun so we add an Extra day in February every four years to keep Calendars and Seasons aligned.

The Use of Pendulums to Accurately measure time was Discovered by Galileo Galilei around 400 years ago. A Pendulum is a Free swinging Weight hanging from a Pivot.

A Study showed that People felt like Time passed more Slowly when Listening to Music they enjoyed more – Most likely because People more Attention to things they Enjoy, which causes a Slowdown in Time perception.

The Original Roman calendar is believed to have been invented by Romulus, the First king of Rome, around 753 BCE and was based on Phases of the Moon. The Calendar began in March and only had 10 months. Six of those months had 30 days and Four months had 31 days.

The Julian calendar, which was the Calendar proposed by Julius Caesar, was based on the Earth’s Rotations around the Sun. Caesar also introduced two new months to the calendar: July, which was named after him and August, after his successor Augustus.