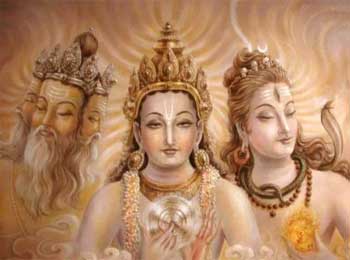 Hinduism is the Oldest religion in the World. The Earliest documents on Hinduism date back to 5,500 BCE.

Hinduism isn’t the actual name for this Religion. Its Actual name is Santana Dharma, which means the Eternal way of Salvation.

Time is separated into Four Yugas. At the end of the Fourth Yuga, All humans will die in an Apocalypse and a New era will come about. Each Yuga Lasts thousands of years, with One cycle lasting 4.32 billions years.


The Most common Language for Hindu scriptures is Sanskrit – the Oldest language in the World.

The Number 108 is the most Sacred number for Hindus.

Hinduism believes in Ahimsa or Non-violence. They don’t want to Hurt any living being. That is why Many, if not all, Hindus prefer a Vegetarian diet.

OM or AUM is the most Sacred symbol or Syllable in Hinduism. It is often Chanted as a Prefix of any Mantra. Its also been suggested that when Chanted the vibration of OM is said to be 432HZ which is the Vibration-al frequency of everything in this Universe.

Rivers are viewed as Sacred but no other River is Worshiped as much as the Ganges River. The Holy river Ganga has its Bacteria called Bacteriophage. It Infects and Kills other harmful bacteria invading the river. That’s the Reason river Ganga water doesn’t go Bad if being kept for a Long time.

Hinduism is the only Religion that never Invaded any country or other religion to Convert them into Hindus. Hinduism has No rule or ritual for Conversion but it will Not be going to Restrict you if you want to Practice Hinduism.

The Vedas are a Large body of text Originated in ancient India. Composed in Sanskrit around 1700-1100 BCE making them the Oldest religious scripture in the World. They had a Great influence over Hinduism

The Major Books of Hinduism are: the Vedas, Ramayana, Bhagavad Gita, 18 Puranas and Mahabharata.

Basic concepts of Mathematics like the number zero, the decimal system, infinity and pi were first used by Hindus.