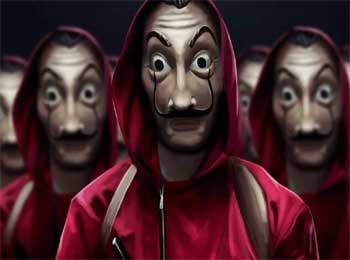 La Casa de Papel aka Money Heist, is the Current popular show across the Globe and is the most viewed Netflix show.

Money Heist was First aired on Spanish TV channel Antena 3 in May 2017.

Original title of the Show is La Casa de Papel which translated to ‘The House of Paper’.

When the First season was premiered in Spain. It’s First episode drew in 4.5 million viewers on the Spanish channel Antena 3 but as the series went on its Viewership plummeted and the Makers had accepted the Doom of the show.


Netflix added La Casa de Papel, retitled as Money Heist in the United States, to its Library with little Advertisement.

The Series never left Spain in its First season. All of those Foreign locales were Recreated by some dedicated set workers and a lot of CGI.

Salvador Dali was a renowned Spanish artist famous for his Surrealist paintings. The Infamous Mask shown in the show is to pay Homage to Salvador Dali.

The Phenomenon given how Intricate the series many Escape plans are. Scripts for the Series aren’t written in advance. Rather they are Written alongside Filming.

The Scuba and the Money throwing scenes were Two of the Most complicated in the Entire show.

The Behind the scenes team did as much Research as possible to make their Heist seem realistic. This included Hiring a Marine engineer to help with the Design of the Antechamber as well as Several metalworkers to Learn the easiest way to melt Gold and Transport it away from the bank.

Long before it was Inspiring fictional robbers on Netflix it was inspiring Real protestors. During World War II ‘Ciao Bella’ was used to rally the Antifascist resistance in Italy.

Money Heist is the most Viewed program on Netflix in France, Italy, Argentina, Chile, Brazil and Portugal.

Stephen King and Neymar Jr are some of the Most Popular fans of the Show.

The Show’s iconography has Inspired Protests and Burglary attempts.

People with iconic Red jumpsuits and Dali masks have appeared in several Protests in Lebanon, Iraq, France and Chile.