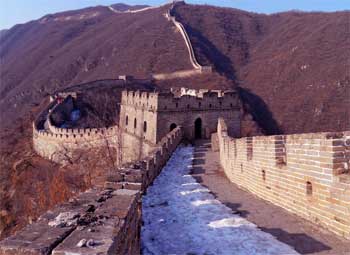 Great Wall of China cannot be Seen from Space with the Naked eye. It can be Seen with Aid.

The Altitudes of the Walls vary – The Highest point is the Huanglouyuan in the Northwest suburb of Beijing, with an Elevation of 1,439.3 meters while the Lowest point is at Laolongtou in Hebei, just above the sea level.

Made over the Course of Hundreds of years, the Wall was built by over 6 different Chinese dynasties and is over 2,300 years old. The Most famous of the Dynasties was the Qin dynasty, during which the Northern walls were Connected.

The Wall is actually Not a Continuous line. It has Spurs going in Different directions and Breaks where mountains or lakes offer Protection.


The Length of all the Great Wall built over thousands of years is Estimated at 21,196.18 kilometers. In the Main today’s wall Comprises relics from the Ming Dynasty, Measuring 8,851.8 km.

The Average Height of the Walls is 6 to 7 meters and the Highest is 14 meters.

The Great Wall is largely Crafted from Unremarkable building Materials like Earth and Stone. More interestingly, Glutinous rice known as ‘Sticky Rice’ was incorporated into the Mortar recipe.

During the Cultural Revolution (1966-1976), Many bricks of the Great Wall were taken away to Use in building homes, farms or reservoirs.

Several strong Nomadic tribes in History had managed passage across the Barrier. For instance, in 13th century, the Mongols led by Genghis Khan breached the Wall.

Over 10 million people visit the Great Wall of China every year.

The Shijing, a Collection of Ancient Chinese poems written between the 11th and 7th centuries BCE, Predicts proper Construction of the Great Wall of China with an Entry describing a king’s efforts to Fend off military invaders via development of a Defensive barrier.

The Most well-known and popular Legend of The Great Wall of China is the story of “Men Jiangnu’s Bitter Weeping” which tells of a Woman whose husband was Killed building the wall. Her tears were so Bitter that the Section of the wall collapsed to Reveal her husband’s bones.

With so many lives lost during Construction, Grieving family members Feared that the spirits of their loved ones would be forever Trapped within the Structure that cost them their lives. In an effort to Grant deceased Laborers Spiritual emancipation, a Mourner would cross over the Wall with a Rooster in tow. This Tradition was believed to help Guide a Soul away from the fortification.

Great Wall construction, maintenance and surveillance were regular duties of Convicted criminals during the Qin Dynasty. Transgressions ranging from homicide to tax evasion were all Punishable with Wall duty. The Work was dangerous – some estimates state that 400,000 workers Perished while building the Wall.