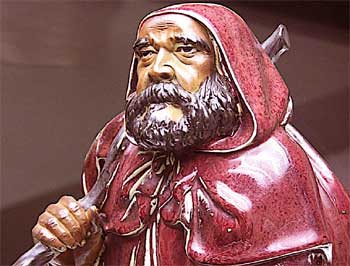 Only the Wise know this Mind, this mind called Dharma-nature, this mind called Liberation. Neither Life nor Death can restrain this Mind. Nothing can. It’s also called the Unstoppable, the Incomprehensible, the Sacred Self, the Immortal, the Great Sage. Its names Vary but not its Essence.

The Mind and the world are Opposites and Vision arises where they meet. When your Mind doesn’t stir Inside, the world doesn’t arise Outside. When the World and the Mind are both Transparent, this is True vision and such Understanding is True understanding.

The Mind’s capacity is Limitless and Its manifestations are Inexhaustible. Seeing forms with your Eyes, Hearing sounds with your Ears, Smelling odors with your Nose, Tasting flavors with your Tongue, Every movement or state is All your Mind.

This Mind isn’t somewhere outside the Material body of the Four elements. Without this Mind we can’t Move. The Body has No awareness. Like a plant or a stone, the Body has No nature. So How does it Move? It’s the Mind that Moves.


When Mortals are Alive,They worry about Death. When they are Full, they worry about Hunger. Theirs is the Great Uncertainty. But Sages don’t consider the Past and they don’t worry about the Future. Nor do They cling to the Present and from Moment to moment, They follow the Way.

Unless you see your Nature, you shouldn’t go around Criticizing the Goodness of others. There is No advantage in Deceiving yourself. Good and Bad are distinct. Cause and Effect are clear. But Fools don’t believe and Fall straight into a Hell of endless darkness without Even knowing it. What keeps them from Believing is the Heaviness of their Karma. They are like Blind people who don’t believe there is such a thing as Light.

Still others Commit all sorts of Evil deeds, Claiming Karma doesn’t Exist. They erroneously maintain that since Everything is empty, Committing evil isn’t Wrong. Such persons fall into a Hell of Endless darkness with No hope of Release. Those who are Wise hold No such Conception.

When you first Embark on the Path, your Awareness won’t be Focused. You are Likely to see all Sorts of Strange, dreamlike scenes but You shouldn’t Doubt that all such Scenes come from Your own Mind and Nowhere else.

The Awareness of Mortals falls Short. As long as they are Attached to Appearances. They are Unaware that their Minds are Empty. And by mistakenly Clinging to the Appearance of things, They lose the Way.

A Buddha is someone who finds Freedom in Good fortune and Bad. Such is his Power that Karma can’t hold him. No matter What kind of karma, a Buddha transforms it. Heaven and Hell are nothing to him but the Awareness of a Mortal is dim compared to that of a Buddha, who Penetrates everything, Inside and Out.

To Enter by Reason means to Realize the essence through Instruction and to Believe that all Living things share the same True nature, which isn’t Apparent because it is Shrouded by Sensation and Delusion.